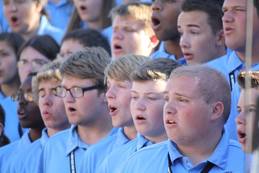 The All-Ohio State Fair Youth Choir was founded in 1963 by Glenville D. Thomas, a native of Wales and a long-time vocal music director at Zanesville High School. He organized the group to allow Ohio's high school singers to share a musical experience similar to that enjoyed by members of the All-Ohio State Fair Band since that group's inception in 1925.

For 29 years, until his death in December 1991, Mr. Thomas led the Youth Choir in concerts for thousands of visitors at the Ohio State Fair, directed them in a number of European tours, and took them to several national parades. Championed by four-term governor James A. Rhodes, the choir has sung for gubernatorial inaugurations and was named Ohio's "Singing Ambassadors of Goodwill."

From 1992 to 2013, the All-Ohio Youth Choir was led by Charles R. Snyder of Coshocton who continued many of the choir's traditions. He and his staff emphasized vocal health -- vitally important for the Fair's outdoor performances and unpredictable weather-related conditions -- and commissioned new works which the Youth Choir has premiered.  In 1995, the All-Ohio Youth Choir was incorporated with the help of choir friend, attorney  Michael P. McCullougg.

In 2014, Jon C. Peterson was named Director of the All-Ohio State Fair Youth Choir.  In his inaugural year, Dr. Peterson led the AOSFYC in music centered on the theme "Many Stories, One Voice."  Click here to learn more about Dr. Peterson.  Annual themes under Dr. Peterson's leadership have included:
During the COVID-19 pandemic, the All-Ohio State Fair Youth Choir was proud to team with our friends in the All-Ohio State Fair Band to keep our rich traditions alive and strong.  In 2019 both organizations hosted the Virtually Amazing online experience -- rehearsals, virtual performances, fun activities and more engaged youth from across the state.  In 2020 the two organizations welcomed current (new and returning) members and alumni to a single-day, in-person outdoor performance at Celebrate 2021​.

The 200 members of the choir are selected each spring on the basis of their ability and experience, the recommendation of their high school choral director, and the consent and support of their parent or guardian. Five days before the opening of the Ohio State Fair, the new choir meets at the Ohio Expo Center in Columbus and launches into a rigorous schedule that includes vocal training, sectional and full rehearsals, solo auditions, and marching instruction. Once the fair opens, the Youth Choir sings six to eight concerts a day and marches up to ten miles a day to various performance sites around the 360 acre fairgrounds.
©2022 The All-Ohio State Fair Youth Choir, Inc.  All rights reserved.